You already know that a fixed-gear bike has only one gear. Well, it may seem like a dumb question, but if a fixed gear (or single speed) bike has just one gear, then which gear is it exactly? And what are the gear ratio and gear inches in the first place?

But there’s a lot more to it than that. So, in this article, you will learn what a gear ratio is, what gear inches are, and how to calculate the perfect gearing for you and your bike. But before we dive too deep into bicycle terminology and its specifics, we need to understand what a gear ratio is.

Editor’s note: This article was updated on June 13, 2022, to include additional information regarding bicycle gearing.

Before getting to know about gear ratios, let’s first understand their functions in the first place.

What is gear ratio on a bicycle?

A bike’s gear ratio is the number of teeth on the front sprocket relative to the back sprocket. It also indicates how ‘easy’ or ‘hard’ its gearing configuration is. High gear ratios require more pedal power. Conversely, lower ratios are easier to ride.

You don’t need to calculate the gear’s circumference or anything like that. Just look at the sprockets.

The gear ratio of a bike with a 46-tooth chainring and a 16-tooth sprocket is commonly denoted with a colon; 46:16.

What are gear inches?

Using gear inches is a more accurate way to gauge a bicycle’s mechanical advantage. This measurement takes the diameter of the rear wheel (as well as the width of the tire) into consideration.

However, since the 700c rim diameter is common on almost all adult bicycles, and tire width is a very insignificant increase, we may disregard this element and discuss gear ratios exclusively.

Now that we’ve learned how to speak about gear ratios, let’s look at an example.

Imagine we have a multi-speed road bike with 42 and 52 tooth chainrings and a cassette with 11–28 tooth sprockets. The sprocket in the fourth slot of this cassette typically has 18 teeth. So the ratio would be 52:18, or 2.88, if you rode this bike “in fourth gear” with the chain over the large ring.

This is a near approximation of our most frequent fixed gearing ratio, which is 46:16. Written as a decimal, that’s 2.875.

So, to get a feel of what it’s like to ride a 46:16 single-speed bike, you could just change your road bike onto the bigger chainring and fourth sprocket. That is, assuming your gearing configuration follows our example above.

But what if your gearing arrangement differs? In the following part, we’ll discover how to figure out what gear on your multi-speed bike best fits the gear ratio of any single-speed bike you would consider purchasing. On a similar note, the torque provides a frictional force that propels the bike forward.

How to choose the right gearing

Now we’re going deep into the weeds of gear ratios. Fortunately, the chart below makes it straightforward to discover equal gear ratios. This way, you don’t even need to make any calculations.

Let’s assume you’re seeking to purchase a fixie that comes with a 46:18 gear ratio (meaning a 46-tooth chain and an 18-tooth sprocket). What gear on your multi-speed bike might you attempt to get close to the comparable result?

Are you looking for more advice? Take a look at this video called “What Is The Best Fixed Gear Ratio?” from the Dave Noakes YouTube Channel.

How can I change the gear ratio on my bike?

A fixed-gear bike with an average 46:16 gear ratio could be what you’re looking for. You enjoy riding it, but you just wish the gearing was a bit easier—that way, climbing hills wouldn’t be such a headache.

The most likely course of action is to upgrade from a 16-to-18-tooth sprocket. The gear ratio would drop from 2.9 to 2.6 due to this change. You can verify this information by looking up the relevant values in the table.

The 46-tooth chainring may be replaced with a 44-tooth one to reduce the gear ratio further. This would have a less significant impact, reducing the ratio to 2.8. However, unlike sprockets, chainrings are often more costly and time-consuming to install.

Of course, if the contrary is true and you want a tougher gear ratio—it may be because your local region is relatively flat—then you’d either swap to a smaller sprocket or a bigger chain ring.

If you are looking for a rear-wheel cog with a different ratio, check out the ones below. 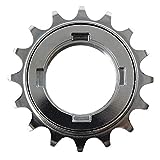 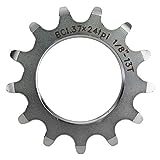 Below are some commonly asked questions regarding gearing on a fixie, single-speed, or track bike.

What does gear ratio mean on a bike?

Simply put, a bike’s gear ratio is the number of times the rear wheel rotates for each round of the crank arms (pedals).

What is a good gear ratio for a bike?

Most individuals like a ratio of 2.6 to 3.0 in flat areas. The lower end of this range, with a cadence of 90 rpm, will let us travel at roughly 30 km/h, while the higher end will allow us to go at around 34 km/h. A gear ratio of approximately 2.7-2.8 will be appropriate if you’re new to fixed-gear and single-speed bikes.

Unless you have extremely powerful legs, that’s a relatively high gear ratio for regular-purpose riding. You may want something a bit lower if you’re starting and stopping a lot like you would in town.

A 1-to-1 ratio means the sprockets on the chainring and the rear cog will have equal teeth. hens on a one-to-one basis (1:1).

So that’s it, Gear ratio demystified. And the handy chart makes it even easier to understand!

This article covered what gear ratio is, what gear inches are, and how to calculate the perfect gearing for your bike. Here are some key takeaways:

So, what gear ratio configuration are you using? Let us know in the comments below (we read and reply to every comment). If you found this article helpful, check out our full blog for more tips and tricks on everything fixie. Thanks for reading, and stay fixed.