Cycling can be a great way to get around town, but it can be tough to know the right words when talking to other cyclists. But how can we learn to talk like a cyclist?

The best way to learn to talk like a cyclist is to hang around cyclists and pay attention to their words and phrases. If you don’t know what a word or term means, take a note, and look it up. Later, use that word in a sentence with your biker buddies. It’s that simple. Many with a pink cycling cap, Apple Airpods, and sunglasses with a high performance bike. Source: Unsplash

But there is a lot more to discuss. So, in this article, you will learn how to talk like a cyclist and use common phrases that bicycle riders often use, so you can avoid looking like a total noobie.

Editor’s note: This article was updated on June 5, 2022, to include additional information regarding cycling terminology.

Before we get into talking like a cyclist, let’s first understand why you might want to learn how to speak like a cyclist in the first place.

Contents
1. The benefits of speaking like a cyclist
2. Every cyclist should know these 31 common terms.
3. What should you never say to a cyclist?
4. Frequently asked questions (FAQ)
5. Conclusion

There are many benefits to using biker lingo and speaking like a cyclist.

1. You can have better interactions

Cyclists are familiar with the jargon and slang used by other cyclists, making interactions with them smoother. And knowing cycling terminology can help you build relationships with other cyclists and make them more likely to help you out when you need it.

2. Using the right words can help you avoid hazards

When you talk like a cyclist, you take the time to carefully phrase your sentences and use words that cyclists would typically use. This can help you avoid common road hazards and make your ride more enjoyable.

3. Become a part of a community

Every community has its own terminology. Cycling is no different. When you use the words cyclists use, you become one of them. Being a community member can give you a sense of pride and being a part of something bigger than yourself.

Are you looking for a real conversation starter? Check out these neat cycling-related novelties items. These products make some seriously awesome gifts. 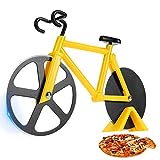 Here are a few cycling-specific terms you may encounter while reading cycling blogs or conversing with fellow riders.

A fixie bike is a bike that does not have a gear system – it is simply a fixed wheel that the rider gears down with their feet.

A term for anything that doesn’t feel right while riding. This can include mechanical failure or a grumpy riding companion.

It means “Just Riding Along” and comes from bike shop humor. “I was just riding along when I crashed into a tree, and the bike completely disintegrated!” How many JRA-related stories do you think bike repair people hear?

Your blood sugar drops dangerously low when your body runs out of fuel. Your brain, muscles, and heart have run out of fuel. It makes you feel like $#!% in addition to being dangerous.

Crashing is the cause of this. When your skin slides across the asphalt, it causes abrasions that range from mild to severe. If you tend to get road rash quickly, try Chamois Butt’r cream to help alleviate your road rash problems.

This is chaffing between the legs and the seat. They usually show up in the nether regions and can be extremely painful.

This is slang for a motorcycle accident.

This racing term refers to quickly accelerating to put a gap between you and other riders.

Breakaway, like attack, is when you or a small group breaks away from the front of a larger group and moves ahead, leaving a large gap behind you.

A sign informing drivers were to halt at an intersection between the crosswalk and the white line (typically painted in a contrasting hue, such as green). Cyclists may now position themselves in front of motorists.

12. Keep The Rubber On The Road

Break a leg! is the equivalent in the theater world. It means “Enjoy the ride!” “Please don’t crash!”

This is a French term for a group of riders attempting to reach maximum drafting speed in a crosswind. As a result, a diagonal line is drawn across the track.

A peloton, a French word, is a large group of cyclists with more than twenty riders.

This happens when a cyclist’s handlebars flip over during a crash. “End over end,” as in

This isn’t a vitamin; it’s just that because cyclists use it so frequently. It’s called ibuprofen.

This is the rate at which your pedals spin. Cadence is measured in revolutions per minute (RPM) and is frequently emphasized when attempting to improve cycling performance.

This is someone who has a low gear and a high cadence. This person “spins” slowly and lightly, relying on RPMs for speed. They can go faster if they can manage more RPMs.

They push pedals slowly in large gears, the polar opposite of a spinner. There is usually a lot of resistance here, leading people to believe that it is more productive when in fact, spinning is more efficient.

A group of nicknames for cyclists who are new to the sport.

This is a power metric. Watts are a measurement of a cyclist’s power output.

Many cyclists refer to their bicycles as steeds. It’s a slang term for horseback riding.

This bike, also known as the clunker, is used as a backup to the main bike. The beater bike, which is usually old and out of tune, is for lazy days and getting from point A to point B.

Your padded cycling shorts are here. CHAFING, blisters and saddle sores are all reduced.

It’s just your helmet, after all. Cycling hard hat is another name for it.

This is a reference to cyclists who dress identically. Everything is designed to match, from the jersey to the shorts and sometimes even the socks.

The Tour de France, the Giro d’Italia, and the Vuelta a Espana are the only three Grand Tours globally. They’re all professional stage races that last three weeks. Many people either observe them or pretend to.

These players are known as rookies in other sports. A first-year professional cyclist is known as a Neo-Pro.

A road biker is referred to like this in slang. Roadies are passionate about road cycling, racing, and everything related to the sport. They have information and figures that others do not.

These riders are frantically pedaling to catch up with and pass riders ahead of them.

What should you never say to a cyclist?

There is no definitive answer to this question, as it largely depends on the cyclist and the situation. However, some general things that should never be said to a cyclist include:

Still have questions? Below are some of the most commonly asked questions about cycling terms and jargon.

How do cyclists talk?

Cyclists talk to each other in various ways to keep track of their position and communicate with other cyclists. Standard methods include shouting, using hand signals, and making noise with gears. When cyclists are riding in a group, they need to communicate well to stay safe and make efficient use of their resources.

Why do cyclists say up up up?

There are a few popular explanations for why cyclists say “up up up” when they’re riding their bikes. The most popular theory is that it’s a signal to other cyclists to stay away since the up up up motion might look like a gesture of aggression.

Another theory is that it warns drivers not to pass them on the road since the raised arm might look like a hand reaching out. Whatever the reason may be, it’s sure to be effective when keeping traffic safe!

What is the best way to talk like a cyclist?

The best way to talk like a cyclist is to hang around cyclists and learn and repeat what they say. They will often drop little words and phrases that might be new to you. You should note those words, then find out what they mean and start using them. It’s that simple.

As cyclists, we must know the right words to use when talking to other cyclists. It makes our conversations more pleasant, but it can also make us better cycling community members.

This article covered How cyclists talk, the benefits of speaking like a cyclist, and some common terms that cyclists use. Here are some key takeaways:

So, are you using some of these terms already? Do you talk like a proper cyclist? Let us know in the comments section below (we read and reply to every comment). If you found this article helpful, check out our full blog for tips and tricks on fixed-gear and single-speed cycling. Thanks for reading, and stay fixed.

1 thought on “How to Talk Like a Cyclist (31 Terms You Need to Know)<h2 class='secondary-title'>Bicycling can be great, but it can be tough to know the right words to use when talking to other cyclists. This post will teach you to talk like a cyclist.</h2>”