Do you enjoy cycling but find that your alertness and attention levels diminish after consuming caffeine? If this is the case, you are not alone. Caffeine has been shown to boost alertness and performance in various sports, including cycling. As a result, many cyclists believe that caffeine is beneficial to their performance. In addition, some athletes will benefit from consuming additional caffeine during longer events, such as an Ironman, through beverages, gels, or energy chews.

This article will explore how caffeine works and if caffeine can improve your performance so you can make the most of your morning ride. Image of a woman with a blue jacket sitting and drinking coffee next to her bicycle. Source: Unsplash

According to research, caffeine may boost alertness and performance while cycling, but the jury is still out on the long-term consequences. That being said, there are some advantages to drinking coffee while riding; it can help boost energy levels and keep you focused. If you’re unsure whether caffeine is safe for cycling, I recommend consulting a sports nutritionist or a doctor.

Can caffeine help your cycling performance?

Caffeine can reduce weariness, lessen pain perception, distort our impression of effort, and boost alertness and focus. In most cases, this results in dramatically increased performance.

While it is common knowledge that caffeine is a diuretic, recent research reveals that caffeine does not cause dehydration during exercise, even at fairly high doses. Furthermore, consistent caffeine consumption does not appear to reduce its short-term performance-enhancing characteristics.

Caffeine may enhance motivation to exercise even before your ride, so it could be the difference between powering through a fruitful indoor cycling session and spending another hour on the couch watching TV.

If you’re looking for a great cup of joe, check out my favorite coffee, Death Wish. It’s the strongest I have found and the best tasting too! 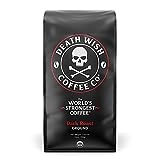 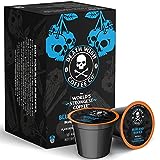 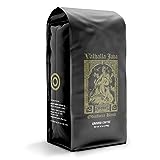 Can caffeine improve your performance?

Caffeine can do more than just help you get up in the morning or battle afternoon sluggishness; when used correctly, it can also work as an efficient ergogenic aid. In a systematic review of 21 studies, for example, researchers discovered a 3.2 percent improvement in endurance performance (time trial performance, not time to exhaustion) with coffee administration.

Caffeine has been shown to improve prolonged endurance and increase efforts lasting 5 minutes at 90 to 100 percent of maximum oxygen intake.

While there is little dispute about caffeine’s usefulness for endurance athletes, the mechanism by which it increases performance is less obvious. According to one popular notion, caffeine affects the brain and central nervous system, enhancing alertness and focus while decreasing central weariness.

Caffeine has also been proven to promote fat consumption by exercising muscles, allowing muscle glycogen to be saved. This appears to have a smaller impact on performance, but it is still measurable.

When should you drink coffee?

Caffeine is quickly absorbed and reaches its peak level in the bloodstream within 1-2 hours, and it can stay in your system for several hours. According to most research, caffeine should be consumed about 60 minutes before an event.

Caffeine may hasten glycogen regeneration after exercise. For example, a post-exercise drink containing 4 g/kg carbohydrate and 8 mg/kg caffeine increased glycogen resynthesis by 66% compared to a carbohydrate-only drink. So if you go out twice a day or need to quickly restore glycogen stores for the next day’s session, this could be a good approach to kickstart your recovery.

Can you consume too much coffee?

Examining caffeine’s risks and negative effects before deciding whether it’s right for you is crucial. Some pExaminingifference after a few strong coffees, but others are highly sensitive to caffeine is crucial and feel jittery, agitated, and restless after only a few.

This difference in caffeine metabolism is primarily genetic; if you fall into the latter category, adhere to smaller doses (under 3mg/kg body weight) or avoid caffeine entirely, as the negative effects may cancel out any performance gains and detract from your enjoyment of cycling. Of course, if you’re not used to ingesting coffee, you may be more susceptible to it.

Coffee may also raise the risk of nonfatal myocardial infarction (heart attack) in people with the gene for slow caffeine metabolism.

If you want even more tips, watch this video called “How Does Caffeine Affect Cycling Performance?” from the Global Cycling Network YouTube Channel.

Do you still have questions? Below are some of the most commonly asked questions about cycling and coffee.

Is coffee good for cycling?

Coffee has been demonstrated to have psychoactive effects that can improve performance. For example, caffeine is a well-known training aid for cyclists. According to the British Coffee Association, “it’s a modest central nervous system stimulant that causes the release of adrenaline for energy.” As a result, it is ideal for endurance sports.

Should I drink coffee before cycling?

If you are a frequent coffee drinker, having a cup before cycling can be useful. Studies have shown that taking caffeine before working out can improve performance, speed, power, and endurance.

Caffeine has been shown to improve cycling performance by shortening the time to finish a repeated time trial or a time-to-exhaustion workout, making it easier to focus.

Does coffee make you cycle faster?

Cycling-specific studies tend to show improvements in the performance of up to a few percent when participants are given caffeine (or placebo) ahead of a cycling test.

Why do cyclists drink so much coffee?

According to the British Coffee Association, caffeine benefits bike riders. It is a mild stimulant of the central nervous system, making you more alert and helping you focus. It can also wake you up if you are tired or lethargic.

Why do cyclists drink espresso?

Caffeine is a well-known training aid for cyclists. According to the British Coffee Association, “it’s a modest central nervous system stimulant that causes the release of adrenaline for energy.” As a result, it is ideal for endurance sports.

As you can see, many athletes and coffee lovers swear by caffeine’s benefits. However, if you enjoy cycling and like to start your day with a cup of coffee, be sure the caffeine content is modest. Otherwise, it may cause unpleasant side effects.

This article covered how caffeine works and if caffeine can improve your performance. Here are some key takeaways:

So, do you love a good cup-a-joe before a long ride? Did we cover everything you wanted to know? Let us know in the comments section below (we read and reply to every comment). If you found this article helpful, check our full blog for more tips and tricks on fixed gear and single-speed bikes. Thanks for reading, and say fixed.