Do you have the ‘need for speed’? Then a track bike is just what you are looking for. Track bikes are a type of bicycle used primarily for track cycling, a sport involving riding a bike around a velodrome. They are typically much faster than road bikes and are designed to be ridden on an indoor track.

In this article, you will learn what a track bike is, where they are used, and some of its advantages and disadvantages, so you can know if a track bike is right for you. A track bike is a type of bicycle that is designed for use on an indoor cycling track. They are typically lighter and faster than traditional bikes, which makes them better suited for racing. In addition to being fast, track bikes are also very stable due to their narrow frame and fork design.

What is a track bike?

A track bike is a bicycle used on an indoor cycling track called a velodrome. They are typically lighter and faster than traditional bikes, making them ideal for racing. Track bikes, in addition to being fast, are also very stable due to their narrow frame and fork design.

Track cycling has grown in popularity since British athletes dominated the 2008 Beijing Olympics, and it is still a major medal winner for Team GB. As a result, many people, both dedicated cyclists and members of the general public have realized that track bikes can be an excellent entry point into a uniquely fast and exciting cycling discipline.

Are there different kinds of track bikes?

There are three different kinds of track bikes:

All of which are designed for certain sorts of track cycling competitions.

Endurance track bikes are more general-purpose machines for longer, more endurance-oriented races. Usually, the frame shapes won’t be as aerodynamically optimized as those of sprinters’ or pursuit bikes.

Although steel and titanium frames are available, they are rarely used in competitive cycling due to their heavier weight and more conventional frame tube shapes. Deep-section carbon or aluminum wheels are typically used with tubular tires inflated to 180 psi. In addition, the gearing on a traditional track bike is likely to be smaller to promote a higher cadence and more consistent power output over longer distances.

The track bikes used by sprinters are significantly more aggressive than the standard track bikes. Longer reach figures are typical, and shorter head tubes are used to reduce the frontal profile. The aerodynamic efficiency of the frame and its components will typically be cutting edge.

Track sprinters can generate incredible amounts of force, so a track’s stiffness is crucial for transferring that energy into forwarding motion. Therefore, you can expect some of the stiffest wheels, handlebars, stems, and chainsets on the market.

A pursuit bike is designed to be as aerodynamic as possible. Therefore, the rear wheels almost always have disc brakes, and the front wheels can have either a deep section or a full disc.

Individuals or teams compete in a time trial format over a distance of one to five kilometers in what are known as pursuit races. Since time is of the essence in time trials, seemingly insignificant factors like the rider’s height in relation to the handlebars, the depth of the wheels, the pressure in the tires, and even the air’s density and temperature can have a significant impact on the rider’s performance.

Riders can get into a lower, more aerodynamic position with the help of aero bars, which are legal under UCI rules.

Looking to try out aero bars for yourself? Below are some nonexpensive options. 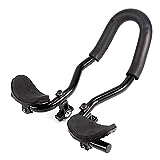 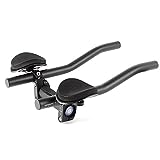 Where are track bikes used?

A track bike is used in longer, endurance-based competitions because of its emphasis on speed. So it’s no surprise that a velodrome is where you’ll most often see people riding track bikes. These tracks are often located inside, and the bikes must be modified to handle the high speeds at which they typically race.

Track cycling’s origins may be traced back to the late 1800s, when the sport first gained popularity in Britain. The oval-shaped velodrome was created with two straight sides and two gently banked bends. Incorporating track cycling into the Olympic program raised the sport’s visibility, and now many riders throughout the globe consider it to be their primary form of recreation.

Why don’t track bikes have brakes?

Track bikes don’t have brakes. They are designed for indoor velodrome racing. In these competitions, all the participants move in the same direction; one person suddenly braking could be dangerous. With a brakeless configuration, all the participants stop at the same rate and point, which is why they have no brakes. Instead, riders use the power of their legs to slow down as needed.

What is the geometry like on a track bike?

A typical track bike’s geometry resembles a road bike optimized for speed. Usually, the frame designs will be aerodynamically optimized, although not as much as the bikes used in sprinting and pursuit.

The Union Cycliste Internationale (UCI) sets design and dimension limits and the shape and diameter of the tubes used to construct the frame.

Why are track bikes so stiff?

Track sprinters can generate incredible amounts of force, so a bike’s stiffness is crucial to ensuring that all that power is transmitted to the track and into forwarding motion. Consequently, components like wheels, handlebars, and stems will often be very stiff on all track bikes.

What materials are track bikes made of?

Carbon and aluminum are common frame materials, but steel and titanium are also available. Still, they aren’t often used in racing due to their increased weight and more traditional frame tube designs.

What wheels do track bikes use?

When it comes to wheelsets, deep-section carbon or aluminum wheels are often utilized with tubular tires pumped at pressures above 180psi. A typical track bike’s gearing is also likely to be smaller to encourage a greater cadence and a more sustainable power output across longer-distance events.

What are the advantages of track bikes (pros)

Track bikes, as previously stated, were created for indoor bike racing tracks known as velodromes. They are designed for maximum light and speed. They look amazing and are as fast as any bike can get. This bike is ideal for a velodrome bike.

What are the disadvantages of track bikes (cons)

Riding them outside is not always safe because they do not come standard with hand brakes. As a result, there will be times when you must stop suddenly and without warning. It is dangerous to be unable to do so easily. In addition, most states and cities require bikes to have brakes to be legal on the road. Finally, of course, the cost is a major consideration. Track bikes can be expensive compared to most casual, fixed-gear bikes.

If you want even more tips and insights, check out this video called What is a Track Bike? from the BikeRadar YouTube Channel.

Do you still have questions? Below are some of the most commonly asked questions about track cycling.

Is track bike the same as fixie?

A track bike is essentially a fixed gear or fixie bike. However, they are much more “professional.” They are intended to be used for racing at very high speeds. Thus, they are lighter than most conventional commuter fixed gear bikes, which are much more expensive.

What is a track bike good for?

Track bicycles are often more rigid than road bikes so that power may be transferred more efficiently when sprinting. In addition, because aerodynamics are so important at such high track speeds, they are more wind resistant.

Can you ride a track bike on the street?

There is just one use for a track bike, and that is track racing. You shouldn’t ride one of them on the street. You can ride your track bike on the road, but it won’t be safe, and, in certain places, it’s against the law to do so unless you have a brake.

A track bike’s simplicity makes it so popular among speedsters. With all the superior features, you can imagine how fast you can slam down your favorite tracks. The only disadvantage you might notice is that these bikes are quite expensive, and some may also be hard to handle.

This article covered what track bikes are, where they are used, and their advantages and disadvantages. Here are some key takeaways:

So, do you ride a track bike? Did I cover everything you wanted to know? And what do you think of my list? Let me know in the comments section below (I read and reply to every comment). If you found this article helpful, check out my full blog for more tips and tricks on track bikes. Thanks for reading, and stay fixed.