Fixed gear (or fixie) bikes typically don’t have brakes because they were most commonly used in velodrome competition. In a track, there is little need to brake or slow the bike down. In a controlled environment like this, speeds are much higher than the speeds riders typically achieve on the roads. This is the main reason why fixed gear bikes don’t have brakes.

But there is more to it than that, so in this article, you will learn why fixed gear bikes don’t have brakes. Why anybody would want to ride a bike without brakes, and what are some of the benefits to writing without brakes on a fixie.

Editor’s note: This article was updated on January 30, 2022, to include additional information regarding fixed gear cycling and track bike racing.

Fixed-gear bikes are originally from the racing world. They were most commonly used in velodrome competitions. On a track, braking and slowing the bike down are not necessary. Speeds are much higher than they would be on the road if this were not a controlled environment. This is the main reason why fixed gear bikes don’t have brakes.

You also don’t want people in front of you slowing down. Riding close to others at high speed is dangerous enough without having to worry about the rider in front of you suddenly braking. Such an action could lead to a serious pile-up and injuries.

Additionally, the lack of brakes decreases the overall weight of the bike, improving performance.

Over the years, however, some track bikes have been transitioned onto the road, and nowadays, several manufacturers are actively catering to the fixed-gear road bike trend. Today, riders can choose from traditional track bike designs (no brakes) or fixed-gear bikes with either a single front brake or front and rear brakes.

Depending on where you live, you might be required to have a front and a rear brake on your bike at all times. Make sure to check out your local laws and always consider safety when riding.

Why would anyone want a bike with no brakes?

Others (myself included) simply prefer the cleaner, more streamlined appearance of a bike without all the excess gear (cables, pads, disc, etc.).

And then there’s the fact that a bike with no brakes is easier to clean and maintain. There’s less to worry about and fewer moving parts to break, fail, or cause problems.

As previously mentioned, originally, track bikes had no brakes to avoid causing a pile-up when racing on the track. But a road-going fixie with no brakes is something seen as being macho. Riders will tell you that they can stop just as quickly, even without brakes, even on the road. They claim they can read the road conditions and traffic around them and anticipate the need to brake.

It’s somewhat similar to the divide between those who wear a safety helmet and those who shun them because they’re not cool. Both have their arguments, but at the end of the day, it’s very much a personal choice.

People also ride brakeless fixed gear bikes because they do tricks that require spinning The Handlebar. Having brakes installed prevents you from spinning the Handlebar.

Interested in buying a fixie? Check out the best fixies here.

What are the benefits of riding with brakes?

Safety is, of course, the biggest consideration. When you can stop faster, you can avoid dangerous obstacles that might pop up at a moment’s notice.

Slippery road conditions are also where the brake comes in handy, as your weight doesn’t shift as much, although many fixie riders would say that on slippery roads, it’s always safer to use the concept of engine braking, mentioned previously, to slow the bike down, or bring it to a stop.

And, finally, there’s the consideration of legality for road use. While some states have no specific laws, others stipulate the need for at least a front brake on any bike used on the public road.

If you’re looking for a new set of brakes for your fixie, check out some of these below 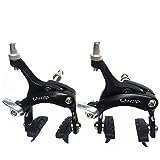 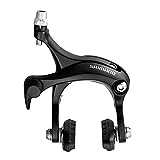 What are the benefits of riding without brakes?

Fixies provide riders with a ton of benefits. Using brakes involves a serious transfer of weight to the front of the bike, which can sometimes cause the rear tire to skid along the road. Most of the braking power comes from the front brake, and so naturally, your weight shifts forward, which can make the rear wheel lift. Using cadence or your pedal stroke to slow the bike down gives you more control.

Another benefit of having no brakes reduced components, which, if you ride every day, can mean that cleaning, maintenance, and mechanical failure issues are reduced.

How do you stop a bike with no brakes?

A bike that has a freewheel but has no brakes is very different from a fixed-gear, non-freewheeling bike with no brakes. The first would require you to basically skid to a halt or even crash into something to bring the bike to a stop.

I’ve seen riders on BMX and fixed-gear bikes with no brakes simply throw their bikes sideways into a skid to bring it to a halt. Granted, they were riding on dirt trails and not on an asphalt surface. Even so, it’s impressive to see their feet never came off the pedals, and they showed amazing control. Impressive stuff!

On a bike with a freewheel and no brakes, you have no choice other than to introduce friction somehow as a means of ‘braking’ the bike. On a fixed-gear bike (without a freewheel), you simply slow down by pedaling slower, which immediately reduces the speed of the bike.

That’s why there is no need for brakes – the speed of pedaling controls the speed of the bike. You can stop on a dime by simply controlling the pedals. It’s quite similar to engine braking in cars, where you shift down gears to slow the engine rather than use the brakes to bring the vehicle to a stop.

Not all fixed gear riders ride brakeless; in fact, many states and countries require brakes to be shipped with any bike sold. The fixie purists, of course, will receive the front brake (at their own risk), but even so, many riders still prefer having an additional brake on falling back on.

Should I ride with or without brakes?

Although there are arguments both for and against having brakes on a fixed-gear bike, you should choose whatever you feel most comfortable with. For the purist, who maybe has track experience, a fixie without brakes may be the most natural thing in the world. Other riders who have transitioned from road bikes to fixies may feel more confident with brakes.

My fixed-gear bike is equipped with both front and rear brakes, although neither of them is used frequently. But I like knowing that I can use them if the need ever arises. Having brakes on a fixed-gear bike doesn’t ruin the riding experience. You still get the main benefit of a fixie (a more engaging ride).

Yes, you’ll see some fixed-gear bikes on the road or elsewhere without brakes. But it’s very much a personal choice by the rider. Not all fixies come without brakes, and if you feel more confident with brake levers at your fingertips, then you can easily find a selection of fixed-gear bikes that come fully equipped with front and rear brakes. It’s a matter of personal choice.

Here’s an awesome video for those looking for some extra tips on riding with or without bakes called Fixed Gear Tips & Riding Brakeless? from the Dave Noakes YouTube channel.

People ride brakeless fixed gear bikes for many reasons. The cyclist might be a velodrome racers; Meaning they race their bikes on an indoor track where brakes are discouraged for safety reasons.

Why do fixies only have front brakes?

Do fixie bikes have back brakes?

A fixed-gear bike allows the rider to slow down the rear wheel via the pedals. As a result, having rear brakes on a fixie may seem redundant to some. However, a rear brake is not detrimental to a fixie and provides additional stopping power.

Do fixie bikes have brakes?

Fixed gear bikes typically come with brakes from the manufacturer. However, a fixed bike can slow down by simply backpedaling, so sometimes, riders remove their brakes and only use their legs to stop or slow down. This is why you typically see these bikes without brakes.

In short, fixed gear bikes don’t have brakes because they are descendants of track bikes that operate in velodromes. Velodromes discourage the use of brakes to enhance the safety of other riders and to reduce overall weight.

So, do you ride with or without brakes? Let us know in the comments below (we read and reply to every comment). If you found this article helpful, check out our full blog for more tips and tricks on everything fixie. Thanks for reading, and stay fixed.