Sometimes laws are meant to protect us; sometimes, they’re just annoying and useless. Such might be the case with bicycle bells. So let’s answer the burning question: Is it illegal to ride a bike without a bicycle bell? And are bicycle bells legally required?

In many states in the United States and the United Kingdom, riding a bicycle without a bell is legal. But in some countries, like Northern Ireland and Australia, it is against the law not to have a bike with a bell, and people who do not have one face harsh punishments.

But there’s a lot more to it than that. So, in this article, you will learn the basics of bicycle bell laws so you can ride safely and confidently.

Editor’s note: This article was updated on June 15, 2022, to include more information about cycling laws.

Are you legally required to have a bicycle bell?

Just as there is sometimes doubt about whether or not you need a bicycle helmet and whether or not they genuinely make your riding experience safer, there is also confusion about bicycle bells across the world. Here’s some bike bell legislation throughout the world.

Before proceeding, I strongly recommend you check with your local authorities before seeking legal advice from some fixie foo on the internet. Now, with that out of the way, here are the laws you should be aware of.

A bicycle bell is required by law in several US states, including New York, Georgia, New Jersey, and South Carolina. Not all states require bells, so check with your local departments. If you live in New York City, check out our guide to bike laws in NYC.

It should be noted that certain local governments may compel you to have a bell installed. For instance, in Ohio, the City of Dayton code requires bicycles to have a bell or other device capable of giving an audible signal that can be heard at least 100 feet away. So, check with your local municipality.

If it turns out you do need a bike bell, check this classic beach cruiser bike bell*. It’s for great reviews on Amazon.

According to Highway Code Rule 66, cyclists must notify others of their whereabouts by “ringing your bell, if you have one. ” As a result, possessing or utilizing a bicycle bell is not an obligatory legal requirement in the UK. Nevertheless, bicyclists are advised to carry a bicycle bell, and all UK retailers are required to sell one. However, it is entirely up to you whether or not you use it.

Whether you need to legally have a bicycle bell or not can vary across the globe, so it is essential to check the local regulations and your bicycle itself before cycling in a new country. Here are some of the countries that require you to have a bike bell installed.

This is not a complete list, and the rules about bicycle bells change all the time, so check the local laws before you ride.

If you need a new bike bell, check out some of the ones we have below (the brass ones are my favorite). 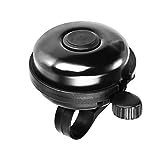 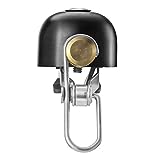 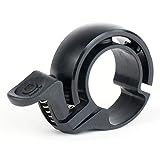 Should your bike be equipped with a bell?

Whether or not bikes should have bells is a matter of opinion unless you live somewhere in which it is a legal requirement. Arguably, using a bicycle bell is there to improve the safety of you, other cyclists, and pedestrians, and it is just a good idea to have one. As previously mentioned, Rule 66 of the UK Highway Code suggests that it is “recommended’ that a bicycle bell be fitted to make others aware of where you are on the road.

Should you shout or use a bell to alert pedestrians?

Most bicycle bells are only loud enough to alert people in the immediate vicinity, not farther ahead. So, if you don’t have a bell, you could just yell, “Watch out!” right? Almost anyone can signal with their voice, and it works without lifting a hand from a brake lever.

However, it can easily be misunderstood or carry an emotional or angry tone (for example, if the person you intend to alert feels like you’re “yelling” at them). For this reason, I strongly suggest using a bell and avoiding shouting at people. You never know who you’re talking to or who has a short fuse. Miscommunication is a stepping stone to violence. So do yourself a favor and communicate appropriately with a bike bell.

We know yelling at people is undoubtedly rude, but can a bicycle bell be considered rude? Some people honk ear-splitting air horns at anyone who might be in their way. Scaring people is rude, yet an imminent threat may bring on a loud yell or scream, unprompted. It can sometimes freeze a charging dog or wayward pedestrian. We all want pedestrians to get out of our way, but don’t be rude. Your cycling behavior should never frighten slower path users as you go past them.

If you are looking for a new bike bell that isn’t rude, watch this video called “Bicycle Bells: Shared Path Etiquette (and the law!)” from the Shane Miller YouTube Channel.

Below are some commonly asked questions regarding needing a bike bell.

Do you need to have a bell or horn on a bike in the US?

Some states require you to have a bell, while others don’t. And even in states that don’t require a bell, local municipalities may require them. So it’s essential to check with your local municipality to ensure you’re not breaking the law.

When should I ring my bike bell?

You should ring your bell whenever you need to grab someone’s attention. This can be for safety or precautionary reasons. If you have a bell, avoid yelling at someone. This can help prevent unwanted altercations.

Is it illegal not to have a bell on your bike?

A bell is an essential safety item. It is in the municipality’s best interest to require a bell on their bike so that pedestrians are warned of oncoming bike traffic. Therefore, some countries, like Australia, have strict laws and penalties for cyclists who do not have a belt on their bikes.

Pedestrians are annoying, but we can help make them less annoying by alerting them to our presence. If you have a bike, try to have a bell or horn on it. Depending on where you live, it might be the law.

In this article, we covered the basics of bicycle bell realities. Here are some key takeaways:

So, are you a fixed-gear rider who always uses the bell properly, or do you just yell at pedestrians to get out of your way? Let us know in the comments below (we read and reply to every comment). If you found this article helpful, check out our full blog for more tips and tricks on everything fixie. Thanks for reading, and stay fixed.