Fixed-gear bikes are excellent for those looking for affordable bikes for commuting around their city. However, these bikes have a few quirks compared to other bikes. If you stop pedaling with other types of bicycles, it isn’t a big deal. However, with a fixie, well, things are a bit different.

The number one questions people tend to have around fixed gear bikes are: how do you stop, and what happens when you stop pedaling a fixed gear bike?

The bike will slow down gradually when you stop pedaling on your fixie. First, however, you need to make sure you’re using pedal straps. Otherwise, your feet will fly off the pedals and spin uncontrollably until you slow down enough to put them back on.

But there’s a lot more to riding a fixie than that. So, in this article, you will learn what happens if you stop pedaling on a fixie, how to pedal, and why some people prefer bikes that don’t coast.

Editor’s note: This article was updated on June 15, 2022, to include additional information about how to stay safe on a fixed-gear bike.

Before learning what happens when you stop pedaling on a fixie, let’s first understand why someone would want a bike that requires constant pedaling.

Contents show
Why would someone want a bike that requires constant pedaling?
What happens to your fixie when you stop pedaling?
How to avoid accidents when stopping or slowing down your fixie.
Frequently asked questions (FAQ)
Conclusion

Why would someone want a bike that requires constant pedaling?

Fixed gear bikes have more pros than cons, especially for people who want to race, get in shape, and have fun.

What happens to your fixie when you stop pedaling?

The very nature of a fixed gear bike is that the rear wheel cog is affixed to the rear wheel. So when the cog moves, the wheel turns—and vice versa. If you are in a situation where you are riding downhill, you also can’t stop pedaling your bike. Your fixie will pick up speed as you head down a hill, which means your pedals will start moving faster.

So, if you stop pedaling the bike, the bike stops moving. Of course, it won’t stop immediately, but without you providing energy to the pedals, there is nothing to keep the bike moving. If you are trying to stop or break your fixie, there are ways to do that by using your legs or reversing your pedals.

How to avoid accidents when stopping or slowing down your fixie.

The more you ride your fixed gear bike, the better your stopping will get. This does not imply that you must ride your bike everywhere—but practicing in a controlled situation can help you become acclimated to the mechanism and enhance your chances of executing a smooth stop. Try to maintain a reasonable cadence when riding.

You can mitigate this by using pedal straps or toe cages. Pedal straps and cages secure your feet to the pedals while you ride, so if you stop pedaling, your legs will move along with the momentum of the cranks. As a result, they won’t fly off, and you won’t look like a jackass, uncontrollably zooming through the city streets. Pedal straps or cages are a must when riding fixed. Below are some excellent toe cage straps we recommend checking out. 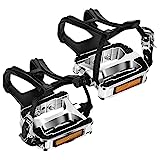 3. Make sure you have enough traction

One of the most challenging aspects of stopping on a fixed-gear bike is that you can not rely on your brakes to stop you. Instead, check that you have adequate traction on the ground to maintain a strong grip on the bike.

When you’re ready to come to a complete halt, move your weight forward as much as possible. This will allow you to slow down fast and prevent collisions.

Use a gear ratio that works for you

Just because someone says you should utilize a 7:1 gear ratio doesn’t imply it’s ideal for you. Instead, it would be best to experiment with different gear ratios until you discover one that works well for your riding style and terrain. Then, you’ll be able to stop your bike smoothly and without incident.

If you want to see how to stop on a fixie, watch this video on how to stop a fixed gear bike from the Pure Cycles YouTube Channel.

Below are some commonly asked questions about stopping a fixed-gear bike.

Can you stop pedaling on a fixie?

Can you stop pedaling on a single-speed bike?

Yes. A single-speed bike has a freewheel. This means you can stop pedaling and coast while riding, just like on a standard geared bike. In addition, you can quickly turn your fixie into a single speed using a flip-flop hub*.

Is it hard to stop on a fixie?

It’s not simple to come to a complete stop with a fixed-gear bike! If you’re not used to it, getting the bike to stop in time might be tough. In addition, if you don’t know how to stop correctly, you can harm your bike and, more importantly, yourself.

Hopefully, this article showed you that stopping on a fixie bike doesn’t need to be complicated.

This article covered what happens if you stop pedaling on a fixie, how to pedal, and why some people prefer bikes that don’t coast. Here are some key takeaways:

So, how do you stop on your bike? Let us know in the comments below (we read and reply to every comment). If you found this article helpful, check out our full blog for more tips and tricks on everything fixie. Thanks for reading, and stay fixed.