There are many benefits of riding a fixed-gear bike. However, it’s not for everybody. Some people straight-up hate fixies. So, what are some reasons people hate fixed-gear bikes?

Some people dislike fixed-gear bikes because many fixie riders don’t do so for the reasons that people typically ride fixed-gear bikes (training, improving cadence, etc.). Instead, they ride them because they’re trendy or to project a counterculture persona.

But there’s a lot more to it than that. So, in this article, you will learn five reasons why people dislike fixed-gear bikes, so you can find out if riding fixed is right for you.

Editor’s note: This article was updated on June 20, 2022, to include additional information regarding riding fixed.

Before getting into why some people don’t like fixies, let’s first understand what a fixie is in the first place.

Advertisement
Contents show
What is a fixed-gear bike?
How do most people feel about fixies?
The seven most significant drawbacks (cons) of a fixed-gear bike
Frequently Asked Questions (FAQ)
Conclusion

A fixed gear bike (or fixie) is a type of bike that has a single gear hub with no freewheel. When you pedal, the bike will only move in one direction—forward. This is different than a traditional bike, where the pedals are attached to the back wheel, which allows the bike to move in both directions.

How do most people feel about fixies?

There’s no doubt that fixies, or single-speed bikes, are becoming increasingly popular among cyclists. So, what are people’s thoughts on them?

Overall, people seem to like fixies for a variety of reasons. Some appreciate the simplicity and ease of riding a fixie, while others find the bike more versatile and fun. Some say that fixies provide a more “pure” experience when riding other bikes.

The seven most significant drawbacks (cons) of a fixed-gear bike

As unbelievable as it sounds, there are a lot of people that don’t like our beloved fixie. Here are some reasons why people think fixies are bad.

Some people hate the idea of fixed gear bikes because they have a negative association with hipsters who ride them for the reasons that most people don’t (training, improving cadence, etc.). Instead, they ride them because they’re cool or to represent a rebellious attitude.

When you consider the mass-produced and well-advertised “counterculture” image that fixies have developed, it’s easy to understand why some may look down on fixed-gear riding.

However, this negative stereotype is quickly vanishing because since riding a bike isn’t as cool as it used to be a few years ago, the hipsters and posers have started to fade away.

2. Fixies can be dangerous.

Some city fixie riders can endanger themselves and others. In addition, many people (not all, but many) have no idea how to ride them correctly.

Because stopping requires either a competent track stand or completely unclipping your feet (if you are using clipless pedals*), you’ll see some fixie riders wobbling around all over the place when they’re doing anything other than moving forward in a straight line and, if you’re lucky, keeling over completely as the lights turn green because they can’t get out of the tracks and they’ve finally gotten themselves into. It’s unsettling for everyone and may be hazardous for some. And the lack of breaks is also considered a safety hazard.

However, this should not be an issue if you know how to ride properly.

3. Descending is not very fun on a fixie.

Descending on a fixed-gear bike, whether you have brakes or not, usually takes a lot more energy than if you do it on a bike that can coast. While descending on a fixed gear, you have to keep scrubbing your speed to maintain a comfortable cadence, meaning you’ll be going down mountains a lot slower than if you were just able to coast. And for many people, descending is the most fun part of riding.

As the fixed gear name implies, you’re stuck with one gear. Many fixed-gear riders take pride in having only one gear, which forces us to become stronger riders if we want to go faster over different terrains. If you can climb a mountain on a fixed gear bike instead of a road bike or any other type of gear bike, that is a much bigger accomplishment, but for some people, that’s just too much pain.

Gears are useful. They let you ride on more types of terrain, pedal more efficiently, and go faster. Fixed gears, on the other hand, take away all of these benefits.

5. They are too minimalistic.

A lot of people also hate fixed gears because they’re too bare-bones. A lot of the appeal of fixed-gear bikes is that they are aesthetically clean and minimalistic. They don’t include things like racks and fenders.

However, most fixies were made for racing on the velodrome, so they’ve remained completely bare-bones, making it a bit of a problem if you ever want to carry stuff on your bike.

You can, of course, buy a rack if you want one. Take a look at the options below. 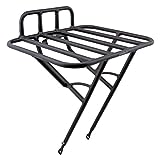 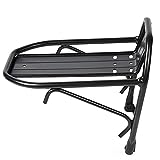 Because they are meant to be used on the velodrome, there tend to be limited geometries with super steep and aggressive c-tube and head tube angles and a short wheelbase to make the bike feel responsive when putting power through the pedals. This can result in an uncomfortable riding position, so It’s not for everyone.

Fixed gear bikes are behind the times when it comes to any new cycling technology, which can be both good and bad.

It can be a good thing because fixies stick to the standards and the way things work. You don’t have to worry about swapping your components over if you get a new fixed gear frameset. Everything works together.

But that can be bad because the fixed-gear world is extremely slow to adopt new technology, even better tech. In the cycling world, for those of you that like to be on the bleeding edge of cycling and technology, looking at fixed gears can feel like visiting an Amish country. Most fixed-gear bikes today look mostly the same as the fixed-gear bikes that were ridden in the first Tour de France in 1903.

So if you’re trying to get the most performance out of your bike possible or are excited to see the innovations in tech and cycling, fixed gear is the last place you would want to be.

If you want to see an example of this in action, watch this video called “5 Reasons People Hate Fixed Gears.”

Below are some commonly asked questions regarding fixed-gear bikes.

Why would anyone want a fixed-gear bike?

What is the biggest drawback of a fixie?

The biggest drawback of fixies may be their limited range. Fixies are generally designed for shorter rides, so if you plan on using them for longer rides, you’ll likely have to switch to a different bike. They are also difficult to get used to if you are new to them.

Is riding a fixed gear worth it?

Yes. They are great bikes to ride. But, it’s up to you whether or not you think riding a fixed-gear bike is worth it—there are pros and cons to both sides of the coin!

A person might not like to ride a fixed-gear bike for a few reasons: they have a “hipster” reputation; fixie bikes do not have a freewheel, they can be dangerous to new riders, and descending may not be very fun.

There truly are many benefits to writing fixies. However, it’s simply not for everyone. And hey, that’s fine too. So long as you’re on two wheels, we can be friends.

So, are you a true fixie-foo who can’t imagine riding with gears? Or is this just not for you? Do you have another reason why people hate fixed-gear bikes? Let us know in the comments below (we read and reply to every comment). If you found this article helpful, check out our full blog for more tips and tricks on everything fixie. Thanks for reading, and stay fixed.