Fixed gear cycling has a passionate culture. There is no shortage of Facebook groups and Instagram accounts dedicated to sharing the passion of riding fixed. And with their recent surge in popularity, it can sometimes seem like fixies are something new. However, the history of the fixie goes a long way.

In this post, you will learn the origins of fixed-gear cycling, how they came about, and where the fixed-gear culture is headed.

Editor’s note: This article was updated on June 22, 2022, to include additional information about cycling history.

Before getting into the future of fixed gear bikes, let’s first understand their origin in the first place.

Contents show
What is a fixed-geared bike?
Who invented the fixed gear bike?
The full history of the fixie bicycle
Frequently Asked Questions (FAQ)
Conclusion

What is a fixed-geared bike?

A fixed-gear bike requires continuous pedaling. Unlike a typical bike, a fixed-gear bike does not allow you to coast. Most bikes have a freewheel cog that allows the wheel to move independently of the pedals. You must pedal (even while riding downhill) with a fixed gear.

Fixed-gears usually include both a front and rear brake. However, fixie purists stick to only a front brake.

Many cyclists prefer the simplicity of a fixed-gear bike because they are easy to maintain due to fewer moving components that may get damaged and need to be replaced. And, they are often cheaper and lighter than a regular multi-geared bike*, making them great for commuting.

But what is a fixie, really? Again, there’s a wonderful quote that goes.

“You can always add something to your bike, but you’ll get to a point where you can’t subtract anything else, and that’s a fixed gear.“

I think this statement perfectly captures the essence of fixed-gear bikes and the beauty of their simplicity.

If you’re in the market for a fixie, check out our post on the top 10 fixie bikes, or check out some of the options below. 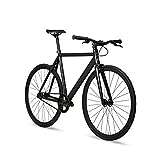 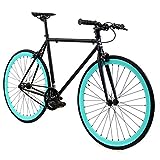 Who invented the fixed gear bike?

Giovanni de la Fontana invented the first bicycle like contraption in 1418, describing it as a human-powered, four-wheel creation with a rope loop attached to gears.

Though not exactly a “bike,” the earliest fixie bikes may be traced back to Fontana’s invention.

Four hundred years later, in 1813, a German nobleman replicated Fontana’s innovation, developing his four-wheeled human-powered vehicle. However, Daria’s introduction of a two-wheeled creation in Europe in 1817 laid the groundwork for contemporary fixies as we know them today.

Because the bicycle’s history is contentious at best, determining when the first fixie was created outside of a general “19th-century” response is difficult. However, when fixie bikes gained popularity among Americans and Europeans, they were used by the postal courier system in the 1800s to transport vital business papers.

Bicycles started to take a more contemporary look with the Lawson safety bike, which allowed you to steer the bike with the handlebars.

The full history of the fixie bicycle

Even though the single-speed road bike utilizes little technology and is seen as “simple” by many today, the bike’s history seems more contentious than most other bikes.

The oldest examples of fixed-gear bikes date back to the invention of bicycles.

All of the early bikes, in their many variations, had some type of fixed gear system. They employed a wheel linked to a pedal by the chain, and the hub and cog of that wheel were attached.

Things stayed this way for years until the freewheel was invented, followed by derailleurs and multi-gear bicycles.

Fixed-gear bikes remained enormously popular in the late 1800s and early 1900s. Big cities like New York City often have big track races, and in 1876, Madison Square Garden was the first place to have a velodrome track. Consequently, these events became known as the “Madison races.” Participants pushed themselves to the limit in these team races, circling the course until they were “tagged” into the race.

Legendary racers such as Eddy Merckx and Francesco Moser invented a fixie built entirely of washing machine components, which served as the inspiration for the film “The Flying Scotsman,” demonstrating how important fixies have been throughout history.

And due to the popularity of fixed gear bikes, many road bike competitors were already acquainted with them. So, fixed gear bikes are still popular for road cyclists to train on during the off-season because they offer a unique workout and help them improve their pedal cadence.

If you love history, check out this video from the OpenLearn from The Open University YouTube channel detailing the history of the bicycle.

When you think of fixed-gear cyclists, you probably envision a bike messenger. A bike messenger (also called a bike courier) is a person who is employed to transport a package or letter from one place to another. Of course, bikes have always been around, but they gained popularity in the 1960s, 70s, 80s, and 90s.

Bike couriers are still essential for intercity document transportation. Companies in the United States and Europe continue to rely on couriers to transport checks, legal papers, and other sensitive documents in densely populated metropolitan areas because they can maneuver around traffic and, in many instances, arrive at their destination faster than a car.

Bike couriers would modify their bikes to make them more suitable for quick movement around the city. This made fixed-gear bikes that were light and fast and needed much less maintenance.

Many bike couriers still prefer fixed-gear bikes and track bikes. Jim Wirtanen, a 12-year veteran of the courier system, discussed fixed bikes and their overall influence on America in a 2005 interview with Wired magazine. Wirtanen, dubbed “Deadguy” by coworkers after being struck by a Lincoln automobile and hurled 40 feet across an intersection, colliding with a light post, has vital expertise in riding fixie bikes.

“Basically, a track bike is a perfect invention,” says Wirtanen, “You can’t make it any better.”

This is where we have to address the elephant in the room. Around this time, the word “hipster” started to become some sort of derogatory term. And this term is typically associated with fixed-gear bikes.

For a time, anything nostalgic was considered “cool,” including the massive handlebar mustaches from the late 1800s that were so popular with hipsters in the mid-to-late 2000s.

The simplicity and timelessness of a simple bike also complemented this aesthetic perfectly. This is why I believe hipsters and fixies are so synonymous.

While it is true that fixed gear bikes started as a subculture, like any subculture, they gradually started making their way into the mainstream and became “too” popular.

Another reason why people started associating the ‘annoying hipster’ with fixed-gear bikes is that, as fixed-gear cycling became part of the mainstream, it became a sort of fashion statement. People would use their bikes as an accessory and nothing more. They wouldn’t know how to ride it. This would create hazardous conditions on the road, especially when people try to ride brakeless without knowing how to properly stop.

Additionally, companies like Wal-Mart suddenly kept them in stock.

So, naturally, at some point, fixies started to be used as a derogatory term in the fixed community to address someone who is a poser (people who used fixies as a fashion statement).

(Note: I use the word fixie all the time because I’m not an elitist jerk)

Now that the posers have worn out their fixies and returned to road bikes, fixed gear cycling has entered the modern era.

The general interest has grown, and there are now several major fixie clubs in major cities and numerous sanctioned and unauthorized racing circuits.

Below are some commonly asked questions regarding the origin and future of fixed-gear bikes.

How old is the fixed gear bike?

The design of a bike goes back 400 years. However, the bikes that we know today originated around 1813. Making fixies about 209 years old.

Fixed gear bikes have been around for a long time, but their popularity skyrocketed in the late 2000s and early 2010s. Their appeal is most likely owing to their simplicity. They’re also ideal for biking in cities since they take up less space than regular bikes.

When did bicycles first get gears?

James Starley came up with the idea for the first bicycle with gears in 1871 and called it the Ariel.

The history of the fixed-gear bike goes as far back as the advent of the bicycle. And the future of the fixie is also secure. But, as I have addressed in this article, the scene is alive and well.

Now that the fixie hype of the mid and late 2000s has disappeared, fixed gear bikes are not around like they once were, but this has led to a tighter community of truly passionate cyclists.

This article covered the history of fixed gear cycling and where the community stands today. Here are some key takeaways:

So, did we miss something? Would you like us to expand on a topic? Let us know in the comments below (we read and reply to every comment). If you found this article helpful, check out our full blog for more tips and tricks on everything fixie. Thanks for reading, and stay fixed.